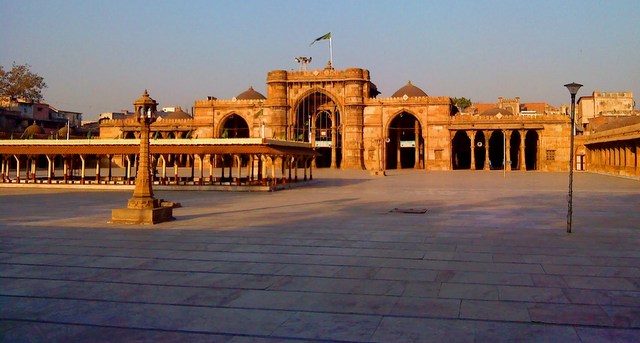 Agreed that it’s the smaller cousin of Delhi’s Jama Masjid but this Ahmedabad wonder appears as brilliantly as a mosque built by a sultan can. It was considered one of the most imposing and beautiful structures of the East when it was built in 1424.

On a bright morning, the sun’s reflection on the massive open courtyard can have a dazzling effect on the eyes. And while the eyes dazzle, the huge arched gateways of the mosque appear and provide instant relief. There are pillars everywhere; 300 of them supporting 15 domes. The mosque also has a separate ladies’ chamber as Sultan Ahmed Shah, the mosque’s builder and founder of Ahmedabad, was considered a progressive king. Now that I have visited the mosque, I think going there in the evenings will be a better idea. Right next to the mosque is a small mausoleum complex that houses the graves of Sultan Ahmed Shah, his son and grandson.

Rani Sipri’s Mosque is a short walk from Jama Masjid but much of the monument has been encroached upon and there is very little to be seen except the graves of Sultan Mehmud Begada’s Hindu queen, Rani Sipri and their son who was executed by the Sultan for a minor offence.

Lying opposite to Mahatma Gandhi Road, on the eastern side of Teen Darwaza, Jama Masjid is one of the most splendid mosques of India. Constructed in the year 1423 A.D, the Ahmedabad Jama Masjid was established by Sultan Ahmed Shah, the founder of the Ahmedabad city. Read on to know more about Jama Masjid in Ahmedabad, India…

Made by using yellow sandstones, the architecture of this mosque is a blend of Hindu and Muslim styling. This edifice was built using items rescued from the demolished Hindu and Jain temples. Supported by 260 pillars, the Jama Masjid of Ahmedabad consists of 15 domes. Jama Masjid lies in the heart of the old city.

There are different entrances to the mosque. Near the eastern entrance, stands the tomb of the Sultan Ahmed Shah, which houses the graveyard of three great rulers, namely Ahmed Shah I, his son, Mohammed Shah and his grandson, Qutub-Ud-Din Ahmed Shah II. The strong structure of this mosque has been able to withstand the pressure exerted by heat and rough weather. A visit to this fabulous monument is indeed a must.