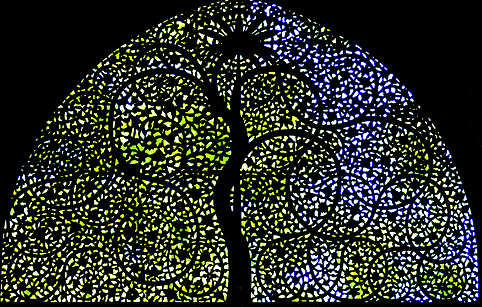 11/04/2015by Patrickin Why Ahmedabad
The first time I crossed this historic landmark, I didn’t think much of this place. It appeared to be the usual mosque located right at the centre of a busy traffic junction. But the merit of Sidi Saiyyed Mosque’s architecture pronounces itself the moment you lay your sights on the exquisite jali windows that adorn the side and rear walls of the mosque. The latticework (jalis) of the rear slabs resembles interwoven trees (a biblical one and a palm tree) hanging with lofty branches and extensively detailed carvings of flora in the background – that’s my interpretation! The carvings are sophisticated and assert the highest level of craftsmanship. It is this elegant design that the pundits at IIM Ahmedabad picked up as an inspiration for their institution’s logo.

The Sidi Saiyed Mosque was commissioned by the last Gujarat Sultanate and was completed in the last year of it’s rule, before the Mughals from Delhi defeated them and took over the city. Gujarat Sultanate can be credited for much of the most amazing Islamic architecture not only in Ahmedabad but also much of Gujarat. The mosques built in their era rival some of the best in the country, and possibly in the world as well.

It was built in the year 1572-73 by an Abyssinian known as Sidi Saeed or Sidi Saiyyed. He came to Gujarat from Yemen and later served Sultan Nasir-ud-Din Madmud III. He was known as the nobleman who helped the poor and had a large collection of books. He built this magnificent monument during the reign of Sultan Muzaffar Shah III, the last ruler of Gujarat.
The mosque was used as a Government office during the British rule. In 1880 CE paper casts of the carved screen were taken and two wooden models were made for the Museum of Kensington and New York.